CEDAM is excited to introduce its new coalition manager, Melvin Henley! Melvin was previously an organizational development consultant and strategy specialist at Nonprofit Enterprise at Work (NEW) and joins the CEDAM team with a wide range of experiences including strategy planning, board development and more.

I met with Melvin (over Zoom) to learn more about his background, what he’s looking forward to in his new role at CEDAM, and other important factoids, like what he’s currently watching on Netflix.

Conversation has been edited for length and clarity.

Can you give me a brief overview of your professional background? 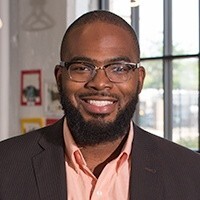 Melvin: I wouldn’t say that I always followed one strand of work itself. With that being said, I think that’s really allowed me to fall into some really unique positions over the course of my career. I’ve always been attracted to nonprofits, having dipped my toe in some for-profit entities, but nonprofit has really been the best environment for me. I would say over the course of my career I’ve been involved in a lot of external facing positions: Events, fundraising or development, and then over the last couple of years have started to pivot into more strategic thinking work: project management, program management, strategy development, and most recently being involved as a consultant, which was a combination of all the different efforts and types of work. I think that leads me to a place being comfortable in a number of different spaces, working with funders and foundations but then also working with boots on the ground people to then transitioning to a board meeting all in the same day.

As CEDAM’s coalition manager, what are you looking forward to most?

Melvin: Being exposed to the areas of impact for something when it comes to things that are happening in your community. You have the boots on the ground people, the folks in grassroots movements, and then you also have the policymakers and people making decisions. A lot of my work previously had been with those first two groups. As you start to get into systems level change, realizing that the policymaking or the decision making piece was something that would happen sporadically, but now it’s having a seat at the table to reflect what was happening at the ground but also being able to hold both of those with policies at the same time. That’s what really attracted me to joining CEDAM and being a part of the team.

What excites you most about the community economic development field?

Melvin: I would say it’s the interconnectedness of this space, of the sector. When you look at it, it’s not one single thing that is economic development, right? You know, although jobs get a lot of the glory, there’s also so many other indicators of quality of life—what’s the arts & culture scene, what’s the access to food? I think that being able to say that there is a through-line through so many sectors that all play a role in community economic development is what is most exciting, and being able to move in and out of spaces and hold different conversations where it’s not just the same thread throughout.

You’ve mentioned before that you’re passionate about arts & culture. Can you tell me a little bit more about how you developed that passion?

Melvin: It’s just something that kind of sets me on fire. You know when you look to travel to a new city, right, you want to get a feel for the place—a feel for the culture, you want to go see their murals, you want to go listen to the local band at the pub, you know do whatever. The arts & culture sector is so vibrant, it’s so life-giving, that I was like, yes, that’s what I want to be involved in.

I know in the past you’ve mentioned working on a UNESCO site.

Melvin: I was involved in Detroit’s receiving of a UNESCO designation. It’s the first and only U.S. city with this city of design designation. We led a city-wide 18-month engagement to figure out what this designation meant for the city of Detroit. We were able to talk about it with early emerging designers to well established designers to existing companies, as well as the education system, neighborhoods, etc. It was something super exciting, something that was really unique, and something I am proud to say I was a part of.

So you’re originally from Chicago—what’s been your experience like moving from one big Midwestern city to another? What do you miss about Chicago, what do you love about Detroit?

Melvin: How do I phrase this in a way that doesn’t get me in trouble? One of the things I miss about the city is that the water is better incorporated into the city. And you know, Chicago summer nights are fun.

Is there anything else you want to tell me about yourself that we didn’t get into?

I would say that overall the organization is very attractive in terms of the place that it holds across the space, right? So being able to be the go-between between grassroots organizations and policymakers is something that’s really attractive, while also providing a number of other services that some people may or may not associate with the organization.

I think also the impact of the organization throughout the state was something that I was really impressed by and I think as I’ve gotten to know the organization better along with the team members, it’s a group of really passionate people that are doing really great work—some of it you get the acknowledgement for and other times it’s quiet acknowledgement.

What was the last book you read?
Melvin: I am in the midst of reading The Girl With The Dragon Tattoo

What are you currently watching?

So I am historically really bad when it comes to watching current TV or movies. I’m five to seven years behind on my viewing. The two most recent things I’ve watched is Amazing Race from like four years ago, which was great because I was missing travel. The other one is Nailed It.

If you could go anywhere in the world tomorrow, where would you go?

I’ve been able to do a lot of great traveling, but one of the areas I have yet to really do is live on an island, like spend some time on an island—not a huge developed island like Australia or the Isles in the UK—but I want to go live in Fiji for like a month or just one of the hundreds of islands off Hawaii or even off Alaska.

What concert are you looking forward to the most?