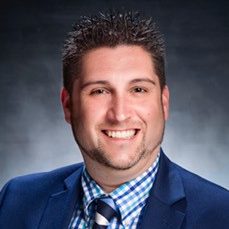 CEDAM is excited to announce Ben Dowd as its new Controller! Dowd will manage CEDAM’s finances, including grant and budget management for CEDAM’s programs, as well as provide human resources support to the CEDAM team.

Ben has been working in banking for 15 years, 12 of which have been spent as a manager at PNC Bank. He spent most of his time in the Saginaw/Bay City area and moved to Lansing in 2015 to manage PNC Bank branches in Lansing.

“Through my employment at PNC, which is cool because PNC is a partner with CEDAM, I’ve actually been involved in Show Me the Money Day events as well as VITA tax preparation locations mainly in the Lansing and the Saginaw Area,” Dowd said.

In his most recent position with PNC, Dowd not only managed his team of bankers and the day-to-day operations, but worked on community development initiatives as well. This entailed getting to know the businesses and organizations involved in the community, acquiring new businesses to work with the bank and building relationships with key partners.

Outside of work, Dowd was on the board of the nonprofit Perceptions in Saginaw, and now sits on the board of Lansing’s Old Town Commercial Association (OTCA), serving as the treasurer as well as sitting on several committees. Dowd has also been involved in Lansing 501 events, Meals on Wheels and has worked closely with the City of Mason’s Chamber.

“A lot of my passion lies with working in communities and really being involved in the nonprofit world,” Dowd said. “A lot of my time outside of my nine to five job is already spent doing those things in our community, so the draw was a natural fit for me.”

Dowd is looking forward to the opportunity to expand his work with communities and finding ways to help them achieve their determined success. “If they have a plan and things established, what can CEDAM do to help boost that and what I can do specifically in my role to help them see success?”

Finally, Dowd is looking forward to increasing his involvement in CEDAM’s programs. “The opportunities are endless… I  am super excited for a chance to join CEDAM and be a part of the work that they’re already doing and will continue to do in the future.”