Identification, an open bank account and a steady source of income are the only three items you need to take out a payday loan. Regardless of your credit score, payday lenders give out these loans (meant to be paid by the borrower’s next paycheck) that are small, but are accompanied with mountainous interest rates.

In Michigan, payday lending is largely unregulated. On a $300, two-week loan, payday lenders typically charge 369 percent APR. According to the Center for Responsible Lending, more than 560 storefronts in the state drain more than $103 million in fees annually, a significant loss to both borrowers and to the overall state economy.

The Michigan Coalition for Financial Empowerment (MCFE), a CEDAM organized program working with its members to help Michigan residents find financial stability, has found that these loans are keeping many Michigan residents in debt traps. Take Perry Green, for example.

“Perry Green, 30, said he ended up spending $1,000 in fees and interest after taking out a $300 payday loan at a storefront in Detroit,” reported Susan Tompor of the Detroit Free Press. “. . . [Green] said his first loan turned into a three-year debt trap after he kept taking one loan out after another to cover bills and fees. He took out the loan to cover his rent because he thought it was his only option.”

And now, legislation was recently introduced in the Michigan Senate to expand these payday lending products in Michigan.

The most recent attempt to expand predatory lending was during the 2016 legislative session when bills were introduced to allow payday lenders to operate as Credit Service Organizations. That legislation would have allowed longer term loans with fees equivalent to triple-digit interest rates, with no limits on the amount of the loan or the fees charged. The bills had one committee hearing but were not taken up again and died at the end of the session.

These predatory loans are marketed as a quick financial fix, but are instead a long-term debt trap for borrowers. At its core, loans authorized under SB 430-432 are loans with excessive rates that will last months, or even years. Lenders will still get access to the borrower’s bank account and have no regard as to whether the loan is affordable or not. In addition to charging triple-digit interest rates, a typical payday loan requires no credit check, and lenders do not generally ask about monthly expenses or debts. 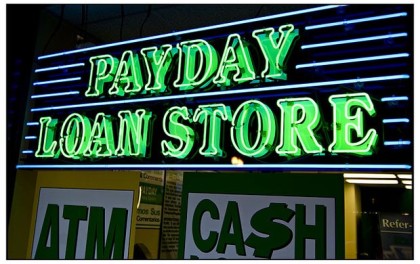 These loans are associated with increased likelihood of delinquency on other bills, such as medical bills and utilities, increased overdraft fees, involuntary bank account closures and even bankruptcy. Both payday and car title loans put current assets at risk, and erect barriers to building assets for the future.

While these loans are said to provide access to credit for those who can’t use a credit card or have no access to traditional loans, the reality is that borrowers consistently report a range of options in dealing with a financial shortfall if these high-interest loans aren’t available. While working with financial counselors to get out of their debt traps, clients have reported cutting back on expenses, borrowing from friends or family, waiting for tax refunds, or waiting until their payday as options they have used to cover expenses.

CEDAM has witnessed a strong shift in the community economic development field toward a greater focus on household financial security. If families are not successful in managing their monthly income and expenses, saving for emergencies and eventually securing assets like homeownership or small business ownership, then our efforts to improve our physical infrastructure and build local economies have far less impact. The longer-term, high interest loans proposed in SB 430-432 present harm to our communities and prey on our state’s hard working families.