Michigan Cities Through the Eyes of NACEDA’s Executive Director

Michigan: a state that can display the growth and prominence of great times, as well as how to pull through and endure difficult circumstances. Certain cities continue to grow exponentially, while others are struggling to  draw citizens back in. Recently, the National Alliance of Community Economic Development Associations (NACEDA) executive director, Frank Woodruff, used his visit to three prominent Michigan cities to create a blog series that he described as a “Goldilocks-themed tour of Michigan.”

“As the second largest populated city in the state, Grand Rapids is hitting a peak in growth.”

In Woodruff’s first post of the series, he was able to visit the bustling city of Grand Rapids. As the second largest populated city in the state, Grand Rapids is hitting a peak in growth. Due to this, though, the city is having to innovate how to invest in local attractions and housing. One of the ways they are doing so is to support Grand Rapid’s own businesses in creating these areas, rather than counting on outside businesses. This helps the city’s own workers get the jobs they need to continue to draw people in. 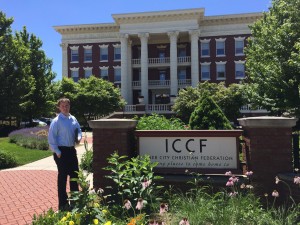 As far as housing for such a large population, the city has the capacity for large growth – they just need to make sure many of the homes they are offering are up to par. This is where a number of CDC’s that double as real estate developers come in, such as Grand Rapids’ own Inner City Christian Federation (ICCF). These nonprofits acquire struggling areas of property and find groups or organizations that want to flip them into houses that hopeful homeowners would want to buy. While the strategy can be a hit-or-miss, it seems to be suiting Grand Rapids just find to fulfill the demand.

“Houses were being abandoned in all areas due to the water crisis. It is a struggle the city shares, regardless of status.”

Once a bustling city, Flint has taken the center stage of struggling cities in Michigan. Declines in manufacturing work and public revenue have taken their toll on the once prosperous city; then the water crisis hit, and added to the cities issues. 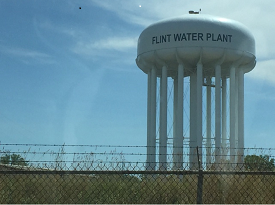 One story Woodruff began to tell was driving through different neighborhoods in Flint. Some that he encountered were as Flint has been displayed nationally since the water crisis started: downtrodden neighborhoods with unkempt homes, overgrown lawns and dirty surroundings. The only active businesses to be seen in these areas were “storefront churches, auto and payday lenders”. On the other hand, some neighborhoods seemed to be doing well. Homes were well kept and looked cozy, but nonetheless, homes were empty here as well. Houses were being abandoned in all areas due to the water crisis. It is a struggle the city shares, regardless of status.

Unfortunately, the city had few truly active CDC’s before the water crisis, but these groups are now being kicked into high gear to address Flint’s citizens. The Mott Foundation, an LISC office, has promised to contribute $100 million dollars to help in Flint’s recovery. Neighborhood foundations can expect money to be coming their way to help hire and train new staff to help the communities they serve. Although it may take some time, help is on the way for Flint, and hopefully this help will turn around the condition of the city.

“Lansing is a city with ‘innovative’ written all over it” 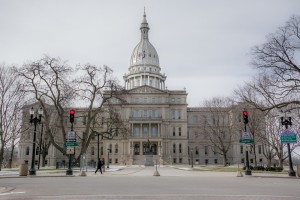 When pondering on Lansing, the phrase “making it work” comes to mind. Lansing doesn’t have the size of other cities, nor does it have the demand for new housing. What Lansing has is the balance to use the space, size and resources they do have to make a great city.

Lansing is a city with “innovative” written all over it. The example that Woodruff brings up when discussing this point is Lansing’s Financial Empowerment Center. This service provides hands-on counseling to residents on a number of financial topics. While the service is powering along to help citizens, it is also not self-sustainable as of now. Only 1/3 of costs to run the center are paid through their own resources; the rest are generous donations. While this is great for now, Lansing is well aware they cannot run the office forever counting on philanthropy. They have plans to roll out the program statewide, with pilot operations in several key cities across Michigan. The same story can be told for CDC’s in Lansing, which are often highly multi-faceted in the work they’re involved in.

Along with the “making it work” mentality, Woodruff described Lansing as a place that is just “fun”. The city often has a variety of festivals, sporting events and places to visit that make both visitors and citizens enjoy their time there.