Delray resident Scott Brines points at a house in the neighborhood. “This house should be white.” 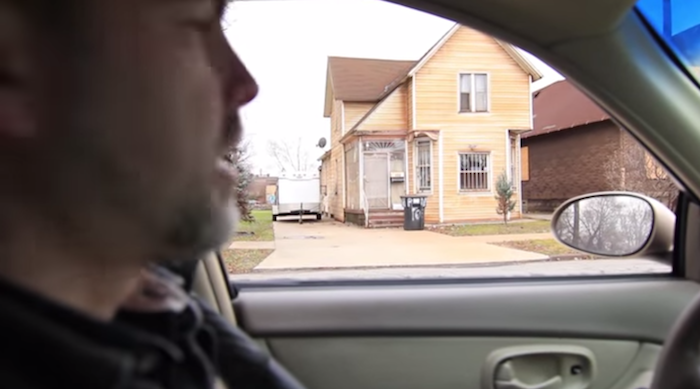 The house is located near a metal processing plant, one of many different industries that at this point have practically consumed the Delray neighborhood. Scott looks at the rust-tinted house. “People have been breathing in that fine metal dust for years and years.”

The scene is from the mini documentary Living with Industry: Detroit, Michigan, recently released by Community Development Advocates of Detroit (CDAD).

Anyone who knows Detroit realizes Delray doesn’t represent every area of the city – especially not places that are flourishing and the neighborhoods far from the factories – but it does make for a depressing caricature of a dying neighborhood. Historically the area was zoned mostly as commercial despite the fact it was then heavily populated by residents. As industry grew, the waterfront disappeared and the neighborhood became more isolated from the rest of the city many chose to leave. The residents who remain today do so because it’s their home. That, or they don’t have the resources to move. Considering what people know about the effects of heavy industry on health, on the health of their children, who would stay if they truly had a choice? 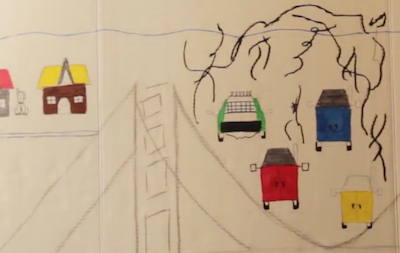 Another neighborhood resident shows a picture her daughter drew of car exhaust clouding over their home. The local Reverend says the area has the highest rate of asthma in a City that already has a rate 1.5x that of anywhere else in the state. Addition of a new bridge to Canada will result in demolition and relocation of 700 residents. Those left will breathe in twice the amount of car emissions from increased traffic.

But what would this riverfront neighborhood look like if, before all those industries located there, they implemented Community Benefits Agreements? If every one of the industries contributed directly to the neighborhood in the form of jobs, investment, or amenities? This gets to the argument of the video: without Community Benefits Agreements, residents may see none of the benefit and all of the cost of living near large footprint industry. Without an Agreement in place, the end result is Delray.

The film is available online at https://youtu.be/912_5FjcO1E.