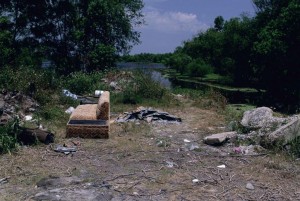 With the rise and fall of different economies nationwide and changes in where people choose to live, we’ve witnessed disinvestment of commercial districts, neighborhoods and even whole parts of cities. Resulting vacant property becomes the dumping ground for garbage and toxic waste, and are not only unappealing to potential residents or businesses, but are also, unsafe. But eventual re-investment in these areas can result in displacement of the people who stayed during the tough times if rents rise and redevelopment of residential spaces forces them out.

To combat this risk of displacement, local initiatives across the nation are considering values that should guide decision-making and ways to integrate community-minded strategies with development policy. Government planning, corporate investment and community-based visions paired together can collectively change the resulting patterns to advance development. Communities can revitalize and develop while benefiting all residents and stakeholders.

Community Land Trusts As an Option

Community Land Trusts (CLTs) are nonprofit organizations that use various sources of public and philanthropic capital to acquire homes in a geographic focus area. Residents own their home outright, but lease their land from the CLT. Their annual fee supports operations and the CLT retains permanent ownership of the land. Homeowners are free to update and change their home or sell it to whomever they choose. However, the home prices are set by the CLT and remain affordable. New residents agree to the same requirements around resale and home maintenance. CLTs are governed by a mixture of community residents, stakeholders and experts, and are designed to stabilize neighborhoods while keeping community control and public interest as the major strategy for future growth.

In the 1980s, the Dudley Neighborhood in Boston was vacant, abandoned and a garbage dump for the rest of the city. In an effort to take control of their own future, they created a bottom-up revitalization plan and led the efforts to reclaim vacant property. Dudley Neighbors, Incorporated (DNI) was created to serve as player in the housing development portion of their comprehensive master plan drafted by the residents. In 1988, the Boston Redevelopment Authority (BRA) granted DNI’s status as a 121A Corporation, allowing them the power of eminent domain to acquire privately-owned vacant land in the area designated as the Dudley Triangle. Through this, the DNI structured a CLT and has changed the entire face of the community with a total of 225 new homes and two community spaces or micro-centers built on DNI land.

Last month, Detroit stakeholders collaborated at the Financial Institutions Community Development Conference (FICON) to collaborate and share proactive initiatives focusing on two things: community involvement and the avoidance of displacement. While Detroit has lost 60% of the population over the past 60 years, the transformation that is in action right now is a partnership and collaboration of land banks, city and county government agencies, community development and block groups, Detroit Future City, individuals and others. There is a resurgence of growth and momentum sparking engagement and a public forum for activity. The City of Detroit progressively works to turn the lights back on, maintain parks and find alternative solutions for vacant property that involves investment and adoption by existing neighborhood residents. Community-based groups such as the North End Woodward Community Coalition (NEWCC) take matters into their own hands by obtaining funding and installing solar lighting throughout the neighborhood to increase visibility and safety.

The Possibility of a CLT in Detroit

Reimagining vacancy is an opportunity to analyze possibilities from a new perspective. Partners want to grow by adding jobs and higher density development. Neighborhood stabilization and improved, yet affordable, quality of life for all current and future residents is critical. Transforming open areas into safe spaces for public gatherings, gardens or some other yet to be determined use is desired and on the table.

Would a CLT benefit Detroit? As the path toward a brighter future is defined, it is important to note the existing work that is taking place. The City of Detroit is actively trying to use the limited available resources as proactively as possible to merely get back to the starting line. Through this, stakeholders are not standing by as spectators. Instead, momentum grows each day with engaging activities working to empower residents and collaboratively define what Detroit will become. Maybe it will ultimately take form as a CLT in some neighborhoods. The concept has positive results in Boston and other areas. Detroit might just benefit from it too.

What do you think?