Funding Housing: A Look at the Housing Trust Fund 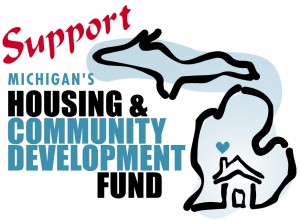 A Review of the Michigan Housing and Community Development Fund: FY 2008

“Michigan’s Housing and Community Development Fund (MHFCD)’s mission is to develop our state’s struggling economy by creating vibrant cities, towns and villages where people will want to live, work, retire and play. Creating strong communities where families can prosper and businesses can grow will attract and keep both our workers and our jobs right where they belong—in Michigan.”

The fund was created to support the development and coordination of public and private resources to meet the affordable housing needs of low-income households and revitalize downtown areas and neighborhoods in Michigan. It was funded for one year as a general appropriation but was subsequently cut the following year.

The MHCDF, housed within the Michigan State Housing Development Authority (MSHDA) was endorsed in FY 2008 by more than 25 statewide trade organizations representing more than 5,000 members. MSHDA worked with these community members to fund their visions for their communities. Some of the key areas targeted by MSHDA programs included:

While this initiative supported individuals, it also had a positive impact on a larger economic scale. In its year of funding, projects awarded leveraged $1 of MHFCD to $11 of public/private sources ($2,163,400 appropriated; $24,041,009 investment leveraged). Thousands of jobs were created, generating millions of dollars in state and local taxes.

Renovation, Rehabilitation, and Repurposing: Current Projects Funded by the MHCDF

Last year, $3.7 million from the Homeowner Protection Fund was allocated to the Michigan Housing and Community Development Fund. The following projects awarded funding are examples of the various projects that have been and can be supported by the MHCDF:

Unfortunately, only 9 projects out of the 65 submitted were able to receive funding due to the limited resources of the MHCDF. It is clear that a larger and more stable funding source is needed in the state of Michigan in order to continue funding projects that serve to strengthen our neighborhoods and communities in a number of ways.

One of CEDAM’s top priority policy goals is to find and secure dedicated funding for the Michigan Housing and Community Development Fund. Over the next few years, much of our energy will be devoted to developing and maintaining a stable funding source in order to allow the MHCDF to meet the housing and community economic development needs of Michigan neighborhoods and communities.